Talk info:
In his talk he will present the evidence for a alternative theory on inflation. He will show that cost of things has been rising over the millennia but it follows a wave-like pattern. Prices rise for a period of a hundred or so years and then consolidate over the best part of another century.
What is happening is that there is an underlying factor driving prices higher. It is more than just the money supply as some economists might assert. It appears related to population and demographic changes. All the previous inflationary phases have been triggered by population increases causing demand to exceed supply.
However once prices start rising, man intervenes to exploit the situation. Investors buy assets that will keep their value during the inflation i.e. property/land and shares. They borrow money to invest, knowing that inflation will erode the true value of their capital and repayments. However that borrowed money increases the money supply which then fuels more inflation in the economy. Governments also join in and encourage inflation, as it allows them to spend more and let inflation deal with their deficits.
But there comes a point when this inflation gets too far away from the underlying trend. We are experiencing that now. Some estimate that world population may peak by 2050 and is ageing in virtually all countries. Older people consume less and therefore the underlying demand curve is changing direction and with it in time also prices probably.
The theory predicts we are about to enter a period of potentially stable and declining prices over the next century. Japan and Europe are good examples of areas that might be in this state already. If correct, the theory could have a number of implications for wealth management over the coming decades.

Biog:
Pete has a degree in psychology and has worked for most of his career in market research. He’s well known within that industry as a conference speaker and also an innovator. For example, he was the first person to run commercial online surveys in the UK in the mid-1990s. He founded the first UK online market research agency in 1998. The company is now called Join the Dots and has offices in Manchester, New York and Singapore.
Pete has always had an interest in finance and economics. Pete’s first book in that area, Monkey with a Pin, was published in 2012. It exposed how most private investors’ returns are much worse in real life than the theoretical returns promoted by the finance industry. It went viral and was downloaded by over 10,000 people. He then published two books on inflation – the latest of which was Inflation Matters.
You might describe Pete as an author with an inquiring mind. He is not one to blindly accept the orthodoxy and conventional wisdom. Instead, he forms his opinions by painstakingly re-evaluating the facts – and by joining the dots – and sometimes coming to different conclusions than some conventionally trained economists.
Pete has recently moved to Brighton following an MBO of his company. He has many interests iincluding walking the entire coast of England and Wales with his wife, Trish. 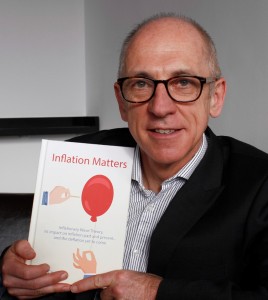