Mark Twain wrote of the late nineteenth Century as a Gilded Age in America, in which vast inequality and insecurity were masked by a veneer of wealth concentrated in the hands of the few. In his new book Guy Standing suggests that we are now living through a Second Gilded Age. Only this time, it’s global.

Guy Standing, best-selling author of The Precariat, argues that governments and international institutions have combined to build the most unfree market economy ever created. It is a deeply corrupt system in which income and wealth are increasingly channelled to the owners of property – financial, physical and intellectual – at the expense of everyone else.

The book reveals how global capitalism is rigged in favour of this ‘rentier’ class to the detriment of workers – not just those in low-paid jobs, but many professionals and entrepreneurs. While wages stagnate, rental income has soared. A powerful plutocracy and elite has enriched itself, not through production of goods and services, but through ownership of assets, including patents and other forms of intellectual property, and the private exploitation of scarce resources.

It has been aided by government subsidies, tax breaks, corrupt deals and the ongoing privatisation of public services. Debt has become an integral part of the system. Meanwhile, labour markets are being transformed by outsourcing, automation and the rise of the on-demand economy, generating more rental income for the few while creating an ever larger precariat.

Advance praise for The Corruption of Capitalism:
“The Basic Income is an idea whose time has come, and Guy Standing has pioneered our understanding of it … As we move into an age where work and leisure become blurred, and work dissociated from incomes, Standing’s analysis is vital.”
Paul Mason, author of Postcapitalism: A Guide To Our Future

“Guy Standing’s incisive critique … should put politicians and ruling elites on the alert.”
John McDonnell, shadow Chancellor of the Exchequer

Guy Standing is a professor at the School of Oriental and African Studies, University of London, and a Fellow of the Academy of Social Sciences. He was previously Professor of Economic Security at the University of Bath, Professor of Labour Economics at Monash University, and Director of the Socio-Economic Security Programme of the International Labour Organization, in the United Nations. He is a co-founder and honorary co-president of the Basic Income Earth Network. His books include A Precariat Charter: From Denizens to Citizens (2014); The Precariat: The New Dangerous Class (2011), Work after Globalization: Building Occupational Citizenship (2009), and Basic Income – A Transformative Policy for India (2015). 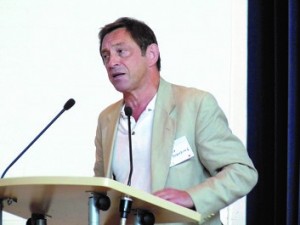 Upcoming events - click on a speaker's name for more details